This is the story of a Wicklow man born into a 19th century world of privilege who became one of the most influential politicians in Irish and British history. He fought for the rights of tenants to own their land and battled to achieve Home Rule for Ireland. He was adored by the Irish people. However, his love for the wife of another man led to his downfall, but his impact on Ireland will never be forgotten. 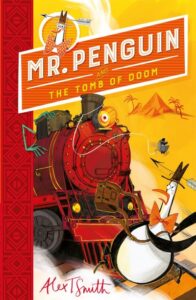 Mr. Penguin and the Tomb of Doom

Claude At the Palace